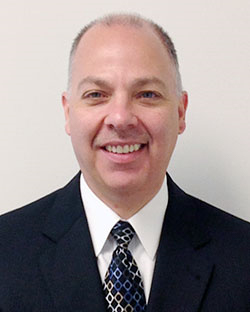 R. Mark Cosimini is the Supervising Partner of our Champaign office and has been with the Firm since 1997. His practice is focused on representing employers and insurance carriers in Workers’ Compensation matters as well as defending liability cases throughout Central Illinois.

Mark attended Northwestern University and graduated with his Bachelor of Arts degree in 1988. He then went on to Northern Illinois University where he earned his Juris Doctor degree in 1992.

Mark was admitted to the Illinois Bar in 1992 and to the U.S. District Court for the Northern District of Illinois in 1994. He is also a member of the Illinois State Bar Association, the Champaign County Bar Association, and the Justinian Society of Lawyers. Mark was appointed to serve as a member of the ISBA Workers’ Compensation Section Council (2006-2009). He is currently on the Board of Directors of the Illinois Association of Defense Trial Counsel (IDC) (2012-2016), and he served as the Co-Chairman of the Workers’ Compensation Committee of the (IDC) (2008-2010), and the Chairman of the Legislative Committee of the IDC (2015-2016).

Before coming to Rusin & Maciorowski, Ltd., Mark was an Assistant State’s Attorney in Peoria County from 1992 to 1994.

Mark has been a speaker at several seminars, and he has also written numerous articles that were published in ISBA and IDC publications including the IDC’s Quarterly Journal and the IDC’s Survey of Law.

Outside of the firm, Mark was on the Board of Directors for the Central Illinois Division of the March of Dimes from 2000 – 2006. He participates in fundraising efforts for the Mahomet-Seymour High School Marching Band and the Mahomet-Seymour Soccer Club. He lives in Mahomet, IL with his wife, Lisa, and their two sons, Tony and Nico.